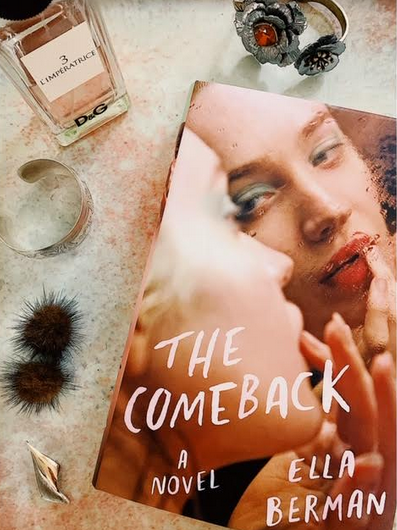 TL/DR- This is a good story if you’re not expecting a novel of revenge, but suffered from some really uneven writing.

This was the first Read With Jenna pick that I didn’t totally love. I thought it had a very slow start, and I almost gave up after 70 pages or so. However, I am genuinely glad I stuck with it. It was a peek into the internal struggles and doubts of a survivor of sexual assault.

The protagonist, Grace, indulges in a lot of self-destructive behavior and withholds what she’s going through from her friends and family for far too long. She simply can’t talk about it. While a lot of times I was screaming at Grace inside my head, the reality is that this is something I haven’t experienced. I have no idea what my responses or coping mechanisms would be. So I did appreciate what this book had to offer in that regard.

However, I felt very strongly that this book could have benefited from a better editing job. I think Berman’s writing was really uneven, sometimes it was gorgeous, but more often I was distracted by her heavy reliance on a few (way too similar) adjectives/adverbs.
For instance:

1. I counted at LEAST 12 uses of the word carefully. Carefully scanning aisles. Carefully sitting on a couch. Carefully choosing words.

What does that even mean?? At one point it was used three times in three pages.

2. An obsession with words that convey meticulousness: particular, acutely, perfectly, manicured, military precision, and yes, carefully. They were all over the place. I guess it could be argued that Grace is preoccupied with control and precision as a counteractive to the lack of control she has over her life, but the usages aren’t limited to Grace’s thoughts and dialogue. They are more scattered than that, so I don’t think this was intentional over usage.

3. LOTS of saying things slowly. At one point two different characters said something slowly in two separate conversations on two consecutive pages. It got to the point that I would go back and try to read the dialogue out loud slowly and TBH I sounded ridiculous!

I know this all seems nitpicky- but it was distracting for me, and detracted from what was otherwise an understated but powerful story, similar to how I felt about A Woman is No Man (I know, unpopular opinion- but that was another great story that was done a severe editing disservice.)

I’ve read a lot of criticism of this book that found it lacking in pacanche, revenge, or twists. I think this is a common pitfall of judging books that aren’t your preferred genre. This book isn’t intended to be a thriller, or a romcom, etc. I think it was intended to paint a portrait of what this particular woman expereinced in the aftermath of her sexual assault, and while the writing fell short of what I’ve come to love about Jenna’s picks, the story is still worth the read.

View all posts by Tessa Palfrey

In which Tessa attempts to read as many books as possible while also raising a small human, working full-time, and working on an MBA.

Let’s Get Back to the Party

How Long ‘Til Black Future Month?